One of the founders of Mycoplasmology, Eyvind A. Freundt passed away May 31 2009 almost 90 years old.

Eyvind A. Freundt received the MD degree from the University of Copenhagen in 1946. Following internship at several hospitals he was employed at Statens Serum Institute, Copenhagen in 1948 – 62 where he worked at the department of diagnostics and the influenza department. As part of his work he performed research resulting in his DMSc thesis: The Mycoplasmataceae (the pleuropneumonia group of organisms) which he defended in 1959. During his thesis work Eyvind published 10 papers in scientific journals and started his collaboration with Derrick Edward working at the Welcome Laboratories in London. Both shared a keen interest in taxonomy and their first joined paper published in 1956 in the Journal of General Microbiology (vol. 14, 197-207, 1956) has become a foundation stone in mycoplasma taxonomy. They proposed a new nomenclature scheme for the pleuoropneumonia-like organisms (PPLO) that forms the basis for the present day nomenclature of the Mycoplasmataceae family and the Mycoplasma genus. The organisms referred previously by letters and numbers were given proper binomial names.

The second move by Edward and Freundt in mycoplasma taxonomy occurred in1966. They used the opportunity of the second meeting on the Biology of Mycoplasmas held by the New York Academy of Sciences in New York in May 1966 to assemble a small group of mycoplasmologists particularly interested in mycoplasma taxonomy in order to establish a provisional committee on the taxonomy of Mycoplasmatales. Subsequently, the official International Committee on Nomenclature of Bacteria authorized the mycoplasma provisional committee in its meeting in Moscow in July 1966, naming it the International Committee on Systematic Bacteriology Subcommittee on the Taxonomy of Mycoplasmatales.  Derrick Edward was elected as the first Chairman and Eyvind Freundt as the first secretary of this Subcommittee. This story and the first recommendations by the committee were published in Science (vol. 155, 1694-1696,1967 ). The mycoplasma Taxonomy Subcommittee has continued to meet regularly during the biannual IOM Congresses and its recommendations have been carefully followed, having a profound impact on mycoplasma taxonomy since then.

In 1964 Eyvind Freundt became professor of virology at Aarhus University. During his entire career Eyvind worked on Mycoplasmology.  Already in 1962 at a meeting at NIH, Bethesda, USA, he was asked whether he would be interested in organizing an international reference centre for Mycoplasmas (PPLO). Such a centre was finally established at Aarhus University in 1970 with the support of the FAO (Food and Agricultural Organization of the UN) and the World Health Organization (WHO). With the financial aid of the NIH the Aarhus centre prepared certified mycoplasma reagents, including seeds of different mycoplasma species and antisera against the certified species. These certified reagents were transferred to the NIH and were distributed to mycoplasma laboratories on request. The importance of these reagents to mycoplasma research world wide cannot be over emphasized. The official recognition of the Aarhus Medical Micrbiology Institute as the site of an international mycoplasma reference centre and the funds provided by the different agencies signifies the start of a blooming period where numerous students and international post docs performed Mycoplasma research in Eyvind's lab. Eyvind's key research interest was always focused on taxonomy and biochemistry of Mycoplasmas. Therefore, the reference centre was a gold mine both for his students and his post docs, and still today benefits from the certified reagents collection.

Another important project initiated by Eyvind led to the later establishment of the IRPCM (International Research Program on Comparative Mycoplasmology). This program constitutes a major enterprise of the IOM, fostering international cooperation of mycoplasmologists working on different fields of mycoplasmology. The story starts in 1970 when Eyvind, with the support of the FAO and WHO, invited a group of leading mycoplasmologists to a meeting in Paris held in 1971. This meeting established working teams on special groups of animal mycoplasmas. The heads of the working teams comprised a Board with representatives of the FAO and WHO, Eyvind being elected as the first Chair of the Board. The full story of the IRPCM and its development during the years can be found in the IRPCM site of the IOM organization site. The number of working teams has been extended during the years to include more fields and the reports of their biannual meetings sent to all IOM members provide a wealth of updated information fostering international collaboration. One of the first activities of the early Boards that had a significant impact on mycoplasmology was the publication of a series of documents on procedures useful to mycoplasmologists, leading to the publication in 1983 of the first handbooks named Methods in Mycoplasmology.

The following figure shows Eyvind among other leaders in mycoplasmology attending the International Congress of Mycoplasmology in Bordeaux in 1974. The photograph was taken in the underground church at Saint Emilion during the ceremony of the endowment of the title Member of the Jurat of Saint Emilion Wine Order.  From left to right: Joe Tully (USA), Alan Rodwell (Australia), Wolfgang Bredt (Germany), Derrick Edward (UK), Eyvind Freundt (Denmark), and Shmuel Razin (Israel).

Eyvind's work was honoured in 1994 by The Bergey Medal for his life-long contribution to the field of systematic bacteriology.  Besides his research Eyvind had many other interests, among others archaeology. His interest in archaeology was honoured in 1946 by a Gold medal from the University of Copenhagen for an essay entitled “Prehistoric archaeology: A critical review on the last 10 years research on hunter- and fishing culture in the Nordic stone age”.

Eyvind was a dedicated researcher and a good friend. We will miss him.

Department of Medical Microbiology and Immunology 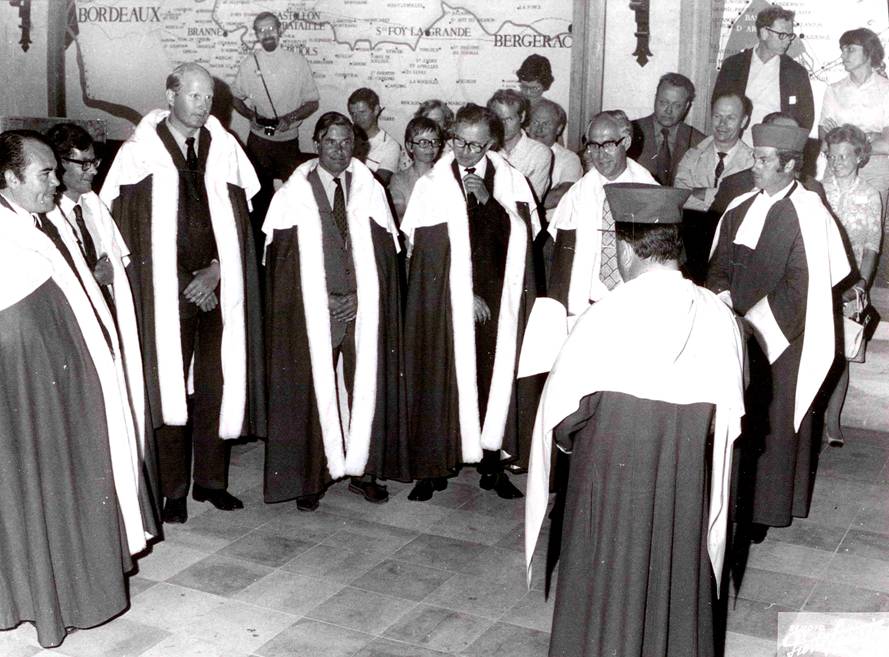